When it comes to anniversaries, my husband doesn’t fool around. Yesterday (two days before our five year anniversary) he surprised me with a commissioned Viking underdress, overdress, and apron dress. He also told me that there is a naalbinded hat waiting for me (it’s a type of Viking “crochet”), a veil coming, and a Viking coat in the works, all from different SCA craftspeople. The underdress and overdress need some alterations (I need to stop eating so much fast food lol), but I was able to get a picture. 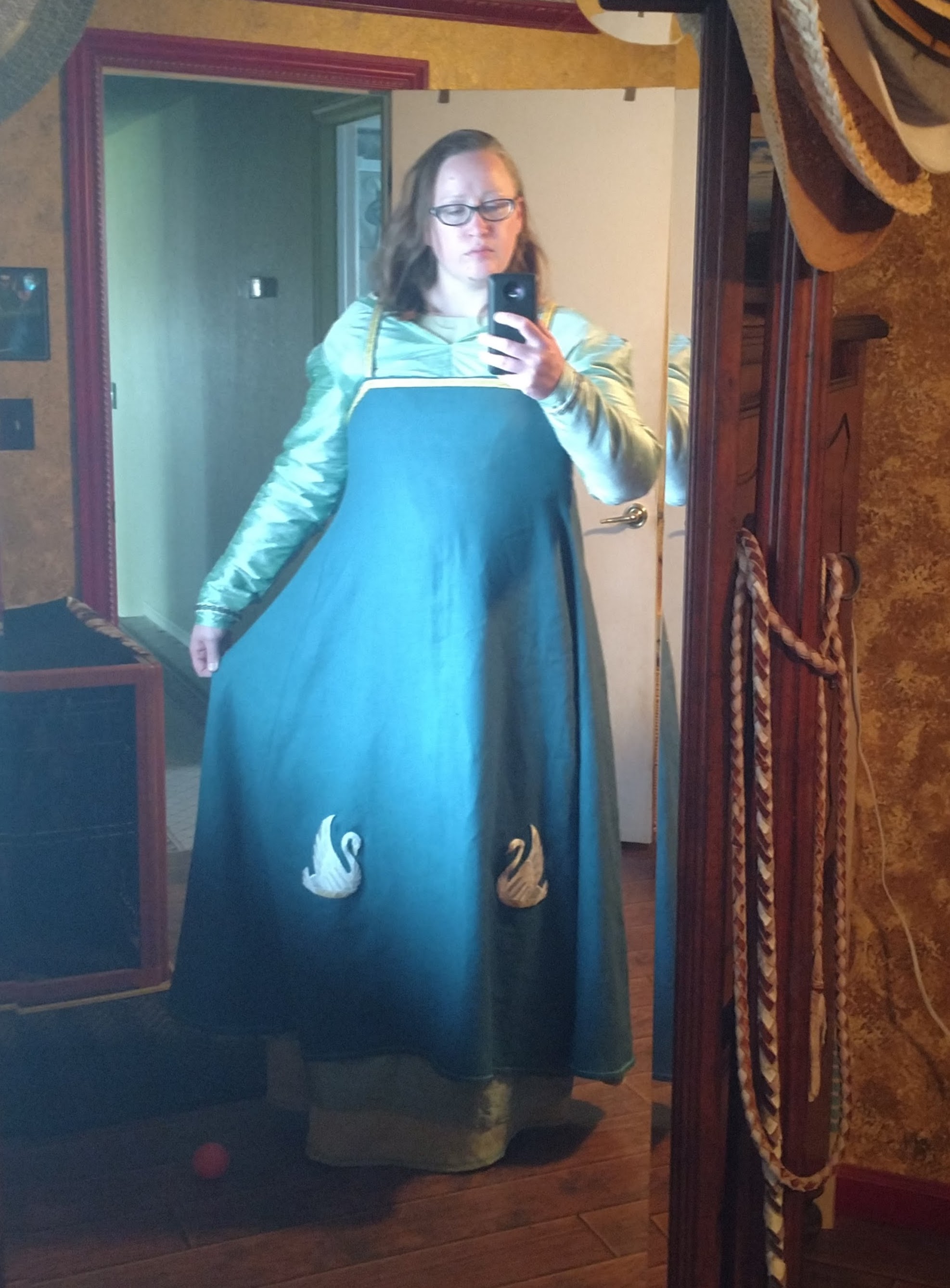 The dresses are made from real linen and silk, the trim is silk (handwoven by my husband), and there will be a hand embroidered sword that will be placed between the two swans.
I kind of suspected something like this was coming when he asked where I kept my copy of my measurements a few months ago. Nothing suspicious at all there 😉 I had pretty much forgotten about it though, until he took me to our friend’s house last night, showed me the dresses on the hanger, and said “Happy anniversary!” Gotta admit, I was a bit slow on the uptake and thought he was telling our friend happy anniversary until he pointed out the swans on the dress.
Since not all the pieces of the puzzle are finished, it will be another month before I can probably wear it. The friend who made the dresses needs to add some width to them and she’s having foot surgery today, so that will have to wait until she’s recovered enough to work on them again, and the coat is still in progress (because the friend who’s making that is quite busy, but heck, it’s almost summer in Arizona so there’s plenty of time).
I think this is the most elaborate anniversary plan he’s come up with yet–and we’re only five years in! I had better step up my gifting game if I’m going to compete. 😉
There are also Viking brooches with swans on them that have been made for me (to pin on my treasure beads and pin the straps of the apron dress), and to trade for some Viking temple rings with swans I’m going to collaborate with my husband to make an over-the-shoulder bag for another SCAdian who does the metalworking. I’m going to embroider and make the bag, my husband is going to weave trim for it that I will then sew on before delivering it.
Once this is all done, I’ll be all Viking’d out! Lol